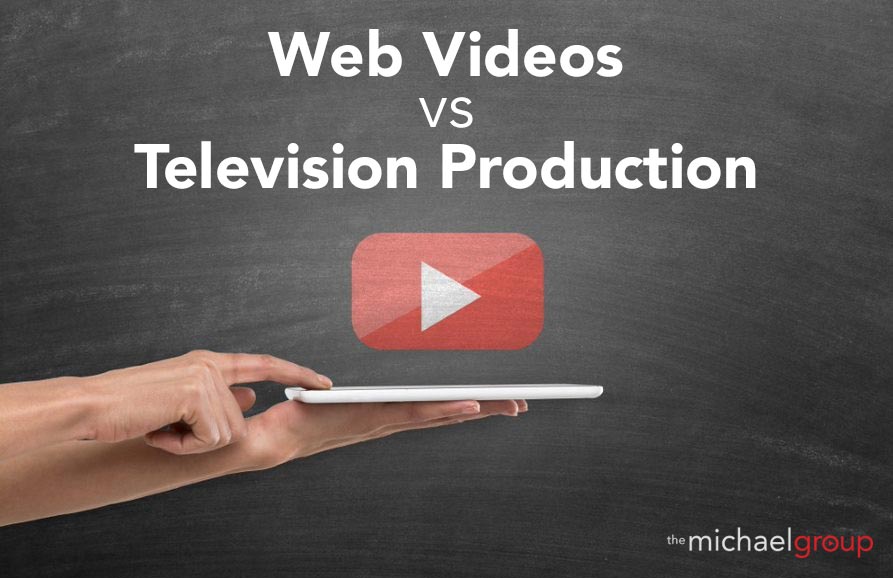 Almost everything about television video production differs from the production of web videos. They are by and large completely different operations, and up to now have not really been in a competitive sphere. There are several factors that make web videos much easier to produce, and are subsequently far easier to broadcast. Here, we look at the difference in production of television and web videos.

Camera Use In Web vs Television Production

Television production requires a variety of camera skills and workmanship. It often involves more than one cameraman to produce a video that meets the standards and style of television productions. Web videos, on the other hand, can often be produced using a single camera and can be shot by a single person. Web videos can be shot and produced with a great deal of ease using whatever camera is available.

Aside from needing an array of cameras to produce videos for television, there is a spread of other highly specialized equipment that captures sound and creates lighting. Often an entire set needs to be created first. The structure of these videos means long filming hours over a period of time with many takes to get an entire video that suits the needs of the television market. Web videos are far simpler. As stated, they can be filmed using a pretty simple camera and there isn’t always a need for more fancy equipment. This, of course, will depend on what kind of content you are filming but even if you are attempting to shoot a high quality video you won’t need half the equipment that a television crew uses.

Web videos average out at four to five minutes and so much less time is spent on production. Time is money, in this case. The need for less equipment, less time, and less specialized skills means the entire operation is less expensive. Web video production will still have some similar costs involved, like sets and actors and good direction. There is the choice to still keep these costs low as there is no expectation that the kind of video being produced meets the same standards in these areas than in television production.

The ease of web video production means that it can have a far wider reach. It can be produced to meet the interests of a particular audience base, and can be churned out quickly and regularly, unlike television productions. One thing to consider, though, is that even with a wider reach, web videos will need more regular production to keep up with its audience. The minds of web viewers are fickle and it is far easier to lose viewers on this platform and so web videos require a great deal more effort in other ways – constant research, trending topics, specialized and flexible advertising, relevance, appealing techniques that match technological advancements, and so the list goes. Research shows that far more people are tuning in for web videos than for television shows these days and so it is an ideal medium. This is mainly due to how accessible the web is for many more people, and how much easier it is to get a better quality of video online with modern devices, added to the fact that television productions can also be easily viewed online.

Even though the pros of web videos seem to far outweigh the pros of television video production, with very few cons, web videos haven’t simply replaced television video production. These are still two completely different media and the production route you choose will depend on what it is that you are producing. A good production house will have experience with both and will be able to guide you on what type of video creation best suits your goals and content, as well as your budget. They will be able to manage the entire process for you regardless of what kind of content you are creating. Get in touch with The Michael Group for all your video production needs.