What Can and Can’t Be Corrected in Video Post-Production 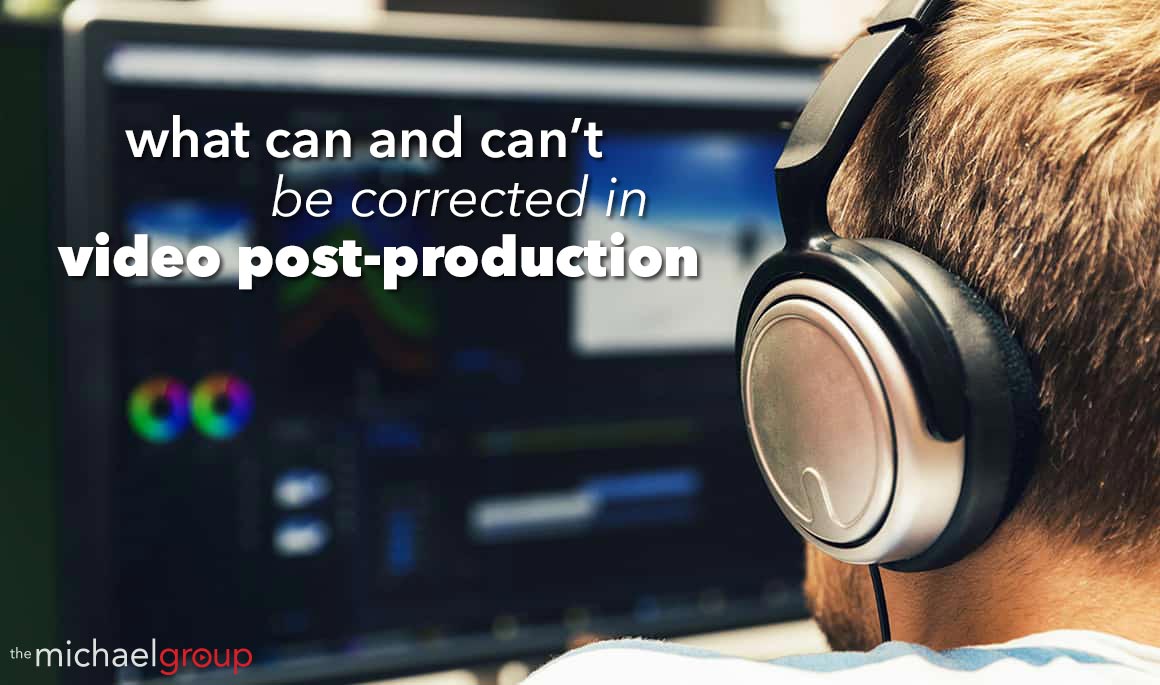 “Just fix it in post”, is something you’ve probably heard in movies, or on some of your favorite reality shows. While what can be achieved in video post-production is staggering, there are some things that simply cannot be fixed. Here we address what mistakes can be fixed in post-production, and what will require re-filming, in order to create a final polished piece of film.

Common Mistakes That Can be Fixed in Video Post-Production

A fairly common fix in video editing is making audio corrections on a piece of film, especially where there is an actor speaking on camera. Audio edits can vary from adding or eliminating background noise, to syncing the captured audio with the captured film, all the way to editing the order in which a line was delivered. For example, an actor might have read a line as, “we are here to help, please contact us”. A director may decide in post-production that the delivery feels unnatural and have a post-production editor change the line to, “please contact us, we are here to help”. Stumbles in speech such as “uhms” can be edited out should your subject be someone who is not a naturally comfortable on video. Other fixes include editing and merging scenes from different takes to make the final cut.

When filming in a public location, such as a cordoned off street or a business’s offices, capturing private or classified information does occur. In such cases, editors can choose to either blur out the information, or replace it with fake details. In the case of filming outside they may choose to place a fake advertisement on billboards and change registration plates on vehicles. When reviewing some of your footage you may think that the subject has been framed incorrectly, leaving too much of the background on the shot and not focusing on the subject. This can be fixed by changing the captured footage from 1920×1080 to something more suitable and while keeping your aspect ratio.

Common Mistakes That Cannot be Fixed

You may have noticed that on many sets, there is a sign that reads, “Quiet, filming in progress”. These signs exist for good reason, as some sounds simply cannot be removed from the footage. Sounds that are constant in pitch and frequency, such as the hum of an air conditioner are easy to remove. However loud and inconsistent noises, as well as echoes, cannot be removed from footage without removing the audio you actually want to be heard. Examples of this, are slamming doors and dropped items while a subject is speaking. Some filmmakers often choose to find a way to include bird chatter or the sound of cicadas into the scene, as their noises are very inconsistent and constantly varying in pitch and frequency, so the subjects are required to speak louder than the background noises in these kinds of scenes.

Another thing that you may have seen on set is a Steadicam. While the majority of footage captured by cameras attached to cars have been stabilized, it is impossible to get the same smooth leveled footage that a Steadicam can offer. Other camera specific errors such as not having the required angle, not having the desired zoomed in detail, and severe overexposure will require a reshoot. An editor won’t be able to get the desired effect out of the footage without completely compromising the aspect ratio, or video quality of the film. Having a fully HD film, with scenes that are pixelated or the completely wrong color will ruin the work.

Post-production is where your footage gets its professional shine and polish, making it one of the most important parts of video production, and should be advised on by a professional post production editing team. This article only covered some of the magic that can be done in post-production, so if an editor gets back to you saying a scene needs to be re-filmed, it is only because the editing simply cannot make the footage work. We at The Michael Group have a highly talented team of professional video editors, that are more than capable of tackling any of your post production needs.